Just Go With It

I've done some crazy out-of-my-comfort-zone stuff lately, and I'm about to keep it going with even more outrageousness. Because dreams aren't always built with blueprints.

I have been restless since the last full week of July when I felt a sense of uneasiness and agitation about my future. I can't say whether these are symptoms of a mid-life crisis, or if I am really taking stock of my life and trying something new, but I had an epiphany of sorts after I wrote about my fear of success. It feels kind of corny to suggest that the stars aligned for me in that moment, but yeah, maybe that is exactly what happened.

That week I decided to stage a photo shoot to promote the new tees for my Busy Black Woman Vote Campaign. I believe my inspiration began with the election results in the Alabama Senate race because all of the post-election analysis suggested that it was the organizing and turnout of black women in the state that helped to elect Doug Jones over the pedophile (and I will never understand why that was even a close contest). Then it was a series of stories about how more women were becoming involved in the political process in response to what happened in 2016, so I designed a new shirt. I ordered a prototype of the shirt and wore it to a rally in February. Then I left it to hang in my bathroom for several weeks to collect dust.

Fast forward to May when I hosted a voter engagement panel at my church. It was poorly attended and I was discouraged by the amount of work I put into planning that went unacknowledged (another issue for another time). But somehow that motivated me to proceed with the shirt, so I placed a limited order. After I wore that shirt to my local primary, I decided to place another order for the full range of sizes, of which there are 18 unsold shirts...

I forgot to mention that I want to donate a portion of the sales to the National Voter Registration Day effort. And I made that donation last week even though I still have 18 unsold shirts.

I also have unsold coffee/tea mugs, shoe bags, and the remainders from the original order of shirts I made several years ago when I had the bright idea to design a shirt to accompany the Busy Black Woman blog. So far this year, I have sold a few, including the one I sold last week.

It was a random decision on a Thursday morning that resulted in this: 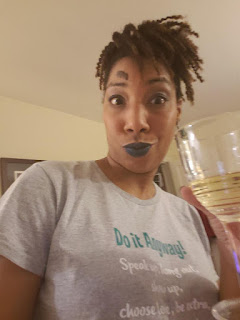 (Oh, and by the way, that is another shirt prototype in the photo.) There was also this unexpected turn of events on Twitter the following day. And now I've decided to write a book.

I used to think that the great book I would write would be a work of fiction, but I don't write fiction. I read fiction. And I am such a snob about the types of fiction that I prefer that I believe I would be an even worse perfectionist about any attempt and never get the damn thing written. Because I actually started to write a fictional story several years ago about a well-to-do church family in a southern city and I swear Greenleaf is probably what it could have been if I had just kept at it. (Yes, I believe that).

So I am going to write a book about my life that is not really a memoir or autobiography, but one that maybe folks will read. And I decided to write this declaration out so that I can have it bug me whenever I don't spend enough time working on it. I probably won't be telling too many people about it, but it is my hope that once the effort is complete, I will be in a space where I am no longer afraid of success. Which means for now, I only have to succeed at finishing the manuscript.
Posted by Ayanna Damali at 4:05 PM No comments: