One Week in September

I just received a very public shout out from one of my line sisters on Facebook that has me blushing. She thanked me for some remarks I gave at a high school retreat, based her recommendation to her sister to invite me. And my very broad smile isn't just over what she said (which was truly overwhelming), but it is based on what it meant to me in the context of everything that has been going on of late.

Remember how I spent time this summer contemplating the meaning of life and trying to write my way towards the 42? How I had been rambling on to myself about fear and doubt and whether the choices I had been making with respect to my business were making any difference? How I declared that I am writing a book (something akin to an opus)?

Well, that brings me to this random week in September that began with my participation in a video and ended with the speech I gave to those high school students. At least that is one set of doubts that have been silenced.

I have unconsciously begun to say yes to things that take me outside of my comfort zone. Earlier this year it was accepting an invitation to take a whirlwind solo trip to New York City. This summer it was deciding to rent a bike while on vacation with a baby seat attached. It has also meant stepping up to take on responsibilities other than caregiving and mothering, such as fundraising and jumping back into community work. It has meant taking risks with uncertain outcomes, and accepting in advance that everything will work out in the end.

I volunteered to participate in this video on maternal health. I am certain that I didn't truly think through all of the consequences of sharing such personal details of my life, and after the fact, I have been rather gun shy about broadcasting it. Yet, I am proud to have offered my perspective and hope that someone will be inspired by my experience.

I attended my first Congressional Black Caucus Annual Legislative Conference in years, which was notable for just allowing me an opportunity to leave the house for "work". Then came the big invitation to be a high school retreat speaker, which was quite a big deal. I responded to a Facebook message from my line sister that asked me for assistance. I naturally assumed that I was being asked for legal advice, so when I received her sister's call, I was completely caught off guard by her request to offer a message of hope to her students. While she was explaining the idea to me, my mind vacillated between why me and how do I politely decline...not for any particular reason, but just because. I asked her why and she offered up her reasons, and I ignored my doubts and said yes.

The choice to say yes was surprising because I wouldn't have imagined that I had anything of value or consequence to say to high school students. I thought about experiences that might relate to where they are and wrote those thoughts down. I worried about over-thinking, about talking too long, and about boring them, and I included all of that in my presentation. Since I am not a natural public speaker, I figured that it would be better to be honest and to use what I would think of as deficits as my strengths. And apparently, it worked. 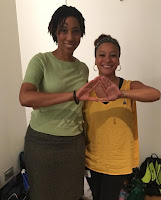 That is the same philosophy I am bringing to writing this book--just putting what I have to offer on the page. I am already over-thinking, rambling on for too long, and not as exciting or riveting as I would like, but I am writing anyway. I have grand ideas and hope that maybe a few of those come together, but I am also going to ground myself by just doing my best. I am going to keep stepping out on faith alone because staying safe and dry in the boat has kept me safe and dry...and adrift. It's okay to get wet every now and then.
Posted by Ayanna Damali at 5:08 PM 1 comment: